Transparency and certainty needed to close $75B infrastructure deficit

The COVID-19 pandemic has led to one of the biggest economic shocks in modern history. Our government is unleashing massive fiscal stimulus to soften the blow, which will lead to significant additional borrowing.

“Investing in high-quality infrastructure will boost economic growth now, ensure we increase future economic growth by removing current infrastructure constraints, and add to the productive capacity of the economy. However, investment alone is not enough. There is also a need for transparency, stability and certainty around infrastructure funding decisions,” ACE New Zealand Chief Executive Paul Evans says.

His comments follow today’s release of a new report ‘Infrastructure for the long haul - A need for transparency and durability.’ The report has been prepared by Sense Partners for ACE New Zealand and aims to unravel the issues that are stifling New Zealand’s infrastructure investments and economic growth, and severely impacting the sustainability of the infrastructure sector.

“Our report reveals that New Zealand severely underinvested in its infrastructure through the 1980s and 1990s. We have not made up for the deficit accumulated in those two decades, nor are we well prepared for the significant demand on our infrastructure due to climate change, ongoing population growth, and the economic challenges of the future.” 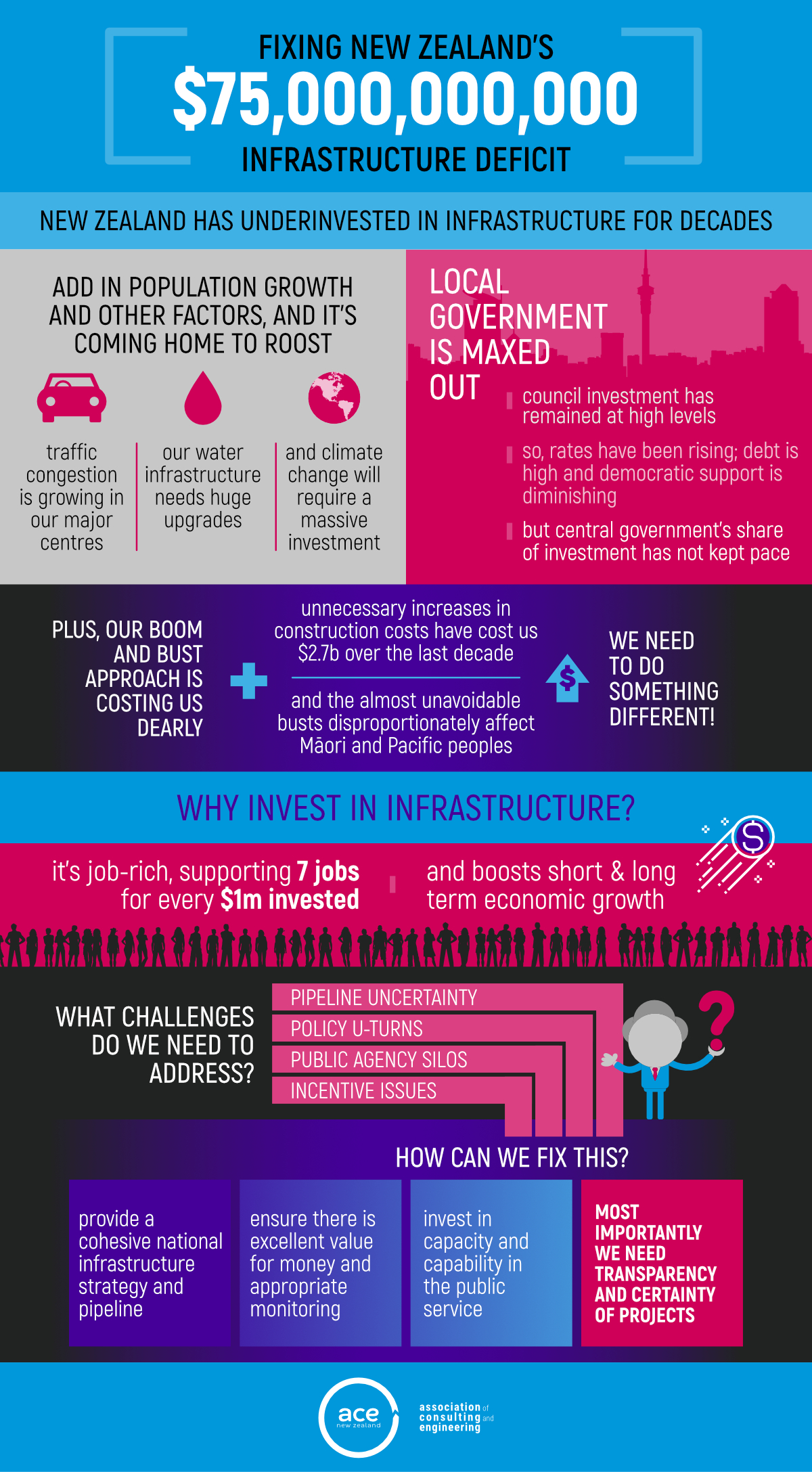 Short-term job and economic gains are impacted by delays from decision making through to implementation. To overcome these delays, we must prioritise rapid decision making, transparency on process and projects, and focus on more straightforward projects in the sequence of the investment programme.

We risk repeating the last recession

There is a risk that local government, which accounts for a third of public investment, will reduce investment through this recession — amplifying a sharp reduction in private sector investment. As a result, the recession will be deeper and long-term economic gains deferred — a pattern that played out in the last recession, a decade ago.

The infrastructure sector lost around eight per cent of jobs and business in the last recession. Once capacity is lost, it is slow to return. But as demand for infrastructure investment returned, the sector faced high costs to regain capacity and capability. And the purchaser, mostly local and central government, end up paying more ($2.7b over the past decade) for the same infrastructure while suppliers did not see improved profits.

We must learn from history

To sustain capacity and capability in the infrastructure sector, which is required to deliver a massive fiscal boost, we need transparency and certainty of projects and their sequencing. Furthermore, to maximise the economic and social impacts, projects must:

Economist Shamubeel Eaqub from Sense Partners says “Infrastructure investment has one of the highest short-term economic returns within the types of investment that the government has significant direct control over, behind only education and health.”

Paul Evans says “Investing in infrastructure will deliver both short-term and long-term economic gains, but to fully realise this, our investment pipeline, once approved, needs to be secure from political interference.”

“This could be overseen by a more powerful Infrastructure Commission, which would need to have the authority and influence to ensure quality projects are prioritised, and once selected, there is a high certainty that those projects will proceed. In its absence, public investment is volatile and uncertain.”

“We can and must do better for New Zealand. For our people, for our communities, for our sector, and our economy Paul Evans says.

ACE New Zealand commissioned this report for a broad thematic overview of infrastructure investment in New Zealand in the context of the Covid-19 pandemic.

We respect your privacy. We’ll only use your details for our own records. View our full terms and conditions.

Infrastructure for the Long Haul - Summary

ACE New Zealand commissioned a report from Sense Partners to understand the broad themes affecting the infrastructure sector in New Zealand in the wake of COVID-19.

Infrastructure for the Long Haul - Summary

We respect your privacy. We’ll only use your details for our own records. View our full terms and conditions.

Transparency and certainty needed to close $75B infrastructure deficit