Without fear, there can be no courage - with Tony Matthews

Tony Matthews lives life to the fullest. A successful project manager for AECOM, an aspiring triathlete, football player and father of three, Tony was recently diagnosed with type 2 bipolar. We talked to Tony about what led to his diagnosis, and where he's at now in his mental health journey. 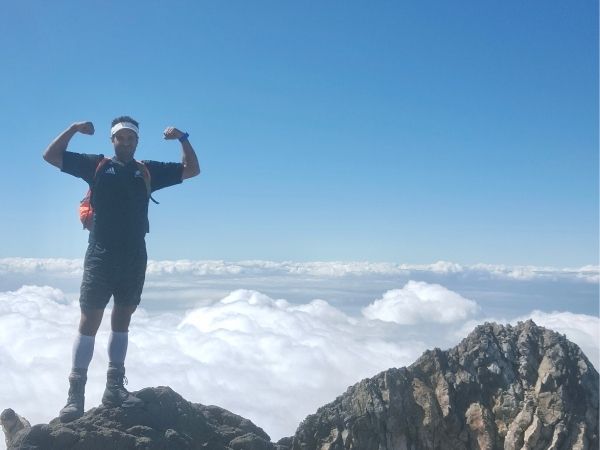 Tony Matthews at the top of Mount Taranaki

Tony, tell us about your recent diagnosis?

I'm usually pretty upbeat and people-focused. But in September last year, I had what I later realised was a manic episode. My ability to recall things and use my creative side seemed significantly better than it ever had been. I was achieving much more than I typically would, and I even felt what I would term a bit "enlightened". It was great, I felt super -but it was wearing me out, and I knew I couldn't sustain it, my brain just kept firing!

The kicker was when I told my wife (who is a nurse) what I was feeling. She had noticed my manic behaviour too. I subsequently found out one of my close friends had noticed that I didn't seem to be myself and a bit erratic, which was quite powerful. I found it essential to get an outsider's perspective as you can't often see it in yourself, and those who really care for you are best placed. 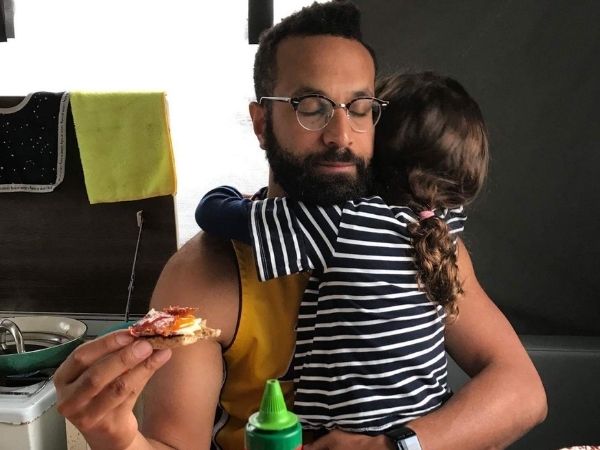 Tony with his daughter

Do you have a plan in place to manage your mental health?

I try to keep fit as much as I can. We've small children, so it's sometimes a bit hard to fit it in around them!

I also practice my Christianity which includes leading and participating in a small group of guys as well as going to Church and even helping out at Sunday School.

Doing a mindfulness meditation every day was my new year's resolution this year, but unfortunately, it has waned. I need to get back to this to build up my "green brain" muscles.

My wife and I did a Mindful Parenting course last year, which was amazing and I'd recommend it to anyone even if you don't have kids as it can be applied to any situation. The key thing is about getting yourself - through mindfulness - into "green brain". In green brain, you are calm and have full control of your faculties to process information and act on it reasonably.

Accessing and maintaining your "green brain" requires training and building your "green brain" muscles – the best way I know how to do this directly is through mindfulness meditation. Strangely, I find myself using the same techniques we practised on the course with my friends and other work and ad-hoc acquaintances more often than on my kids. It's also important to note that "green brain" is the normal brain state that humans are designed to operate in - there is certainly a time for "orange" and "red" brain, i.e. when there is impending or imminent danger, but indications are that the majority of us spend much too much time in these states. 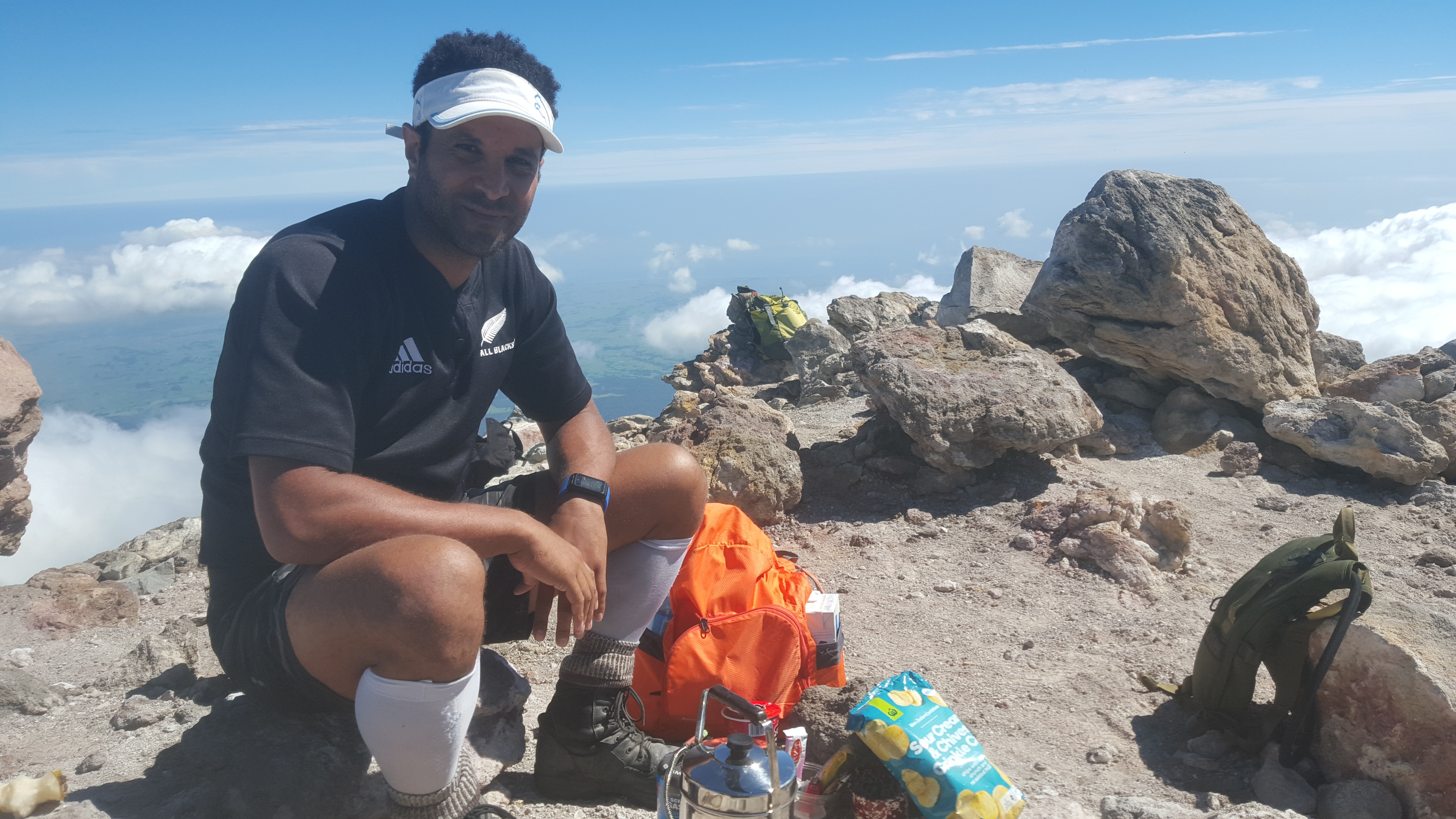 Tony at the top of Mount Taranaki

What would you say to other people struggling with their mental health?

Write down what you are feeling and the thoughts - no matter how random - in your head when they come up. There are so many good reasons for this. It can get the thoughts out of your head, and it helps document and identify cycles. It can then be helpful to look back on when you're well again to give you perspective and insight.

If you're like me and don't typically share internal feelings and push them deep down, call one of the national helplines (1737 is the easiest to remember). These people are angels, and they make you feel better and help you process things like they have magic powers.  Just. Call. Them.

Try not to judge and worry about the stigma of whether you may or may not have a mental health "label". I see my diagnoses as just words that help me to focus my mental health management, much like if I had a broken arm or a recurring knee injury I want to be strengthening.  It doesn't mean I won't be able to cuddle my kids or climb that mountain again – I've just got to manage my recovery and do all I can to stop it recurring. Maybe all I need to do is wear the right protective gear!

I'd also recommend talking to your GP. They'll get you on track to getting help specific to your situation.

Keep up the communication with one or more people that care about you to test and adjust your management as it's a dynamic situation. And just do what you can manage.

Know that having the self-awareness you may need is a big step. Accepting and acting on this self-awareness is courageous. Without fear, there can be no courage.

Overall, my mental health struggles have given rise to the most positive transformations in my life, and I'm strangely thankful for the challenges past and dare I say, future.  I'm so grateful for the support I've received and that I continue to receive. I don't think I would have got the help I needed by myself.

Can you recommend any mental health resources?

How'd your career in engineering begin?

I decided to go into the army after leaving high school. I received a scholarship, so I studied chemical and process engineering at the University of Canterbury. It was the best of both worlds, the leadership and training I got from being in the army were second-to-none, and I came out of it with free education after a six-year return of service in the Territorial Force (Army Reserve) after being commissioned in December 2002.

After I'd finished my study, I started working as an Industrial Coating Salesperson. I'd sell the paint that went on various applications like industrial concrete floors and steel beams. My largest project was supplying intumescent coatings to the Marsden Point Refinery.

I quickly realised sales wasn't for me, so I started with URS after that which was later bought out by AECOM, and I've been there ever since!

My first role was as an Air Quality Engineer mainly performing air dispersion modelling. I took up a role as a Process Engineer and also did some quantitative risk assessment work for hazardous chemical facilities.  In 2008 I moved on to an Environmental role in Abu Dhabi working on and managing Health, Safety and Environmental Impact Assessments, predominantly for the oil and gas industry over there. We had our first child over there but wanted to come back to New Zealand to be closer to family.

I'm now a project manager and feel like I've landed on what I like to do. I thought engineering was all about the technical knowledge, but I now realise that there is an essential human side to the delivery of these technical solutions between the project quality, cost and time triangle.

Connect with Tony Matthews on LinkedIn

Without fear, there can be no courage - with Tony Matthews