A toilet in the middle of nowhere - with Derek Chinn

We've all done it. You're in remote, alpine backcountry New Zealand and nature calls. No one is around, and there's almost always plenty of kawakawa (nature's toilet paper) to help get the job done. But that's exactly what the Department of Conservation was trying to prevent when they engaged Stantec to design and develop a toilet in the isolated Hooker Valley Track in the Aoraki Mount Cook National Park. Rugged, erratic bounders, poor site access and cultural appropriation were just some of the challenges in building the now-named Stocking Stream Toilets. We sat down with Stantec's Principal Structural Engineer, Derek Chinn to hear just how they built a toilet in the middle of nowhere. 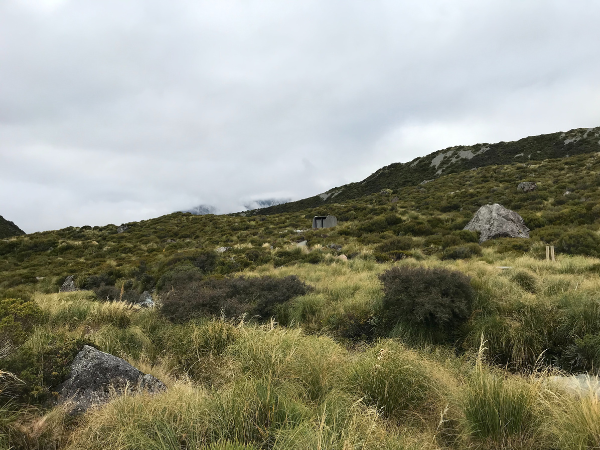 The stocking stream toilets in the Hooker Valley Track

Derek, Stantec won merit at the 2022 ACE Awards. Why is this project so award-worthy?

There has been a steady increase in visitor numbers to National Parks over the past 20 years and the Hooker Valley Track has seen one of the greatest increases. The existing toilets on the track had become overwhelmed and insufficient. High alpine huts like the Plateau Hut on Aoraki Mt Cook, are in an area of particular significance to Ngāi Tahu and the issue of addressing human waste is of particular significance. Various approaches have been taken over time to address human waste in alpine environments and the issue continues to be a challenge for land managers globally. General approaches include carrying it out, on-site composting and pump-out systems. None of these approaches was feasible for the Hooker Valley. 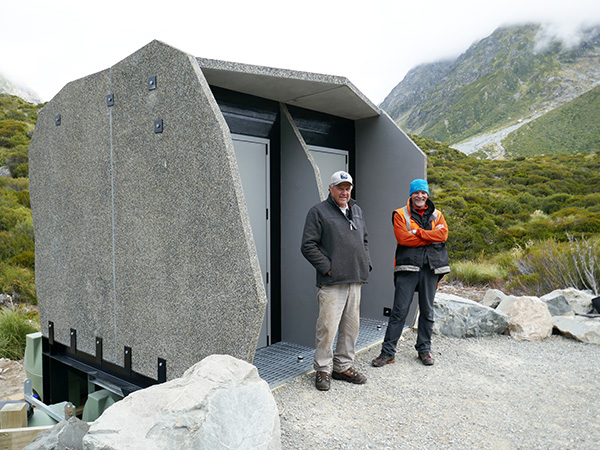 Clinton O’Brien, a contractor from Recreation Construction and Derek Chinn

There are both practical and cultural reasons why ‘traditional’ long-drop toilets aren't appropriate at the Hooker Valley site. From a practical perspective, the rocky moraine makes it challenging to construct a suitable pit and these structures require relocation as the pit fills. Also culturally, disposal of human waste to the ground was no longer acceptable in this location.

An earlier approach to toilet waste disposal was implemented at Pioneer Hut on the upper Fox Glacier Te Moeka O Tuawe Névé about 30 years ago. In this structure, waste was collected in a bag suspended below the toilet seat. When full, the bag was cut loose, and because the cubicle was cantilevered over a bluff above the glacier, the full bag fell down into a crevasse in the glacier below. Fortunately, this approach is now recognised as culturally offensive, and the structure has been replaced with a total containment fly-out drum system.

The best solution for the Stocking Stream Toilets, because of the sensitive alpine nature of the site, was to collect the waste in drums and have it flown out by helicopter for disposal at the Aoraki Mt Cook oxidation ponds. 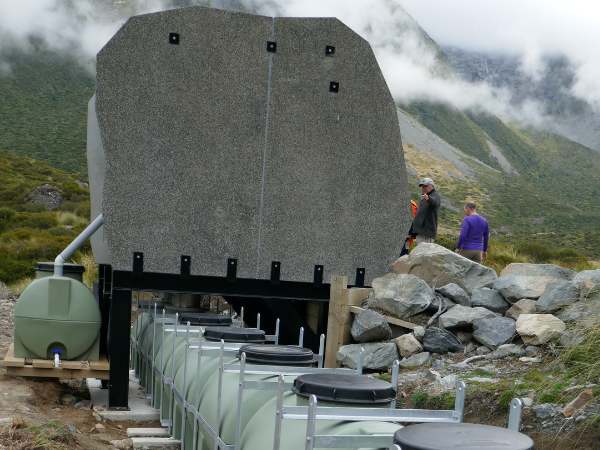 Human waste is collected in drums underneath the toilets

What was the practical design consideration for the toilets?

Constructed on a steel subframe, the superstructure consists of a reinforced concrete panel building and two toilet cubicles. The drums are retained within steel frames which allow the drums to be lifted by helicopter and rolled on rails with nylon rollers. The drums mate with the toilet pedestal using a stainless-steel bayonet fitting which slides down over the top of the drums but can be slid upward to disconnect the dropper from the drum, which allows the drums to be rolled out. A polyethylene lid is then screwed over the drum for helicopter transport from the site.

It doesn't take a lot of effort to replace the full drums with empty ones, ready to be filled again.

The sub-frame forms a retaining wall at the front of the structure, supporting soil at floor level so people can enter the toilet without having to climb steps to the cubicles. The retaining wall also means that the drums are partially hidden.

Unsurprisingly, there is no road access to the site. This made it a real challenge for our contractors to get the materials to the site so we relied on a B3 Squirrel helicopter.

Once the helicopter collects the waste, it's treated at the oxidation ponds in Aoraki Mt Cook village. 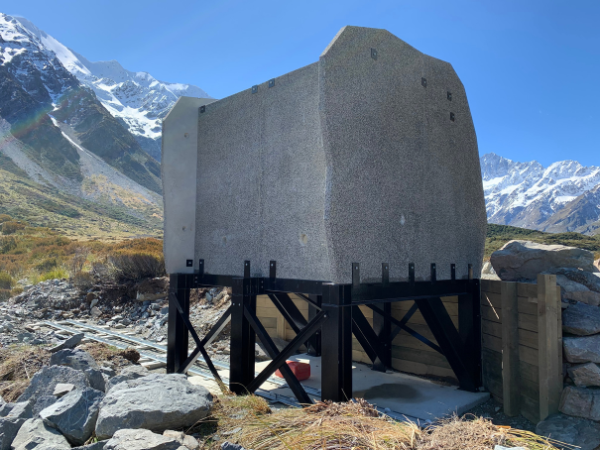 A back view of the stocking stream toilets

What did you need to consider for the site itself and its aesthetics given the environment?

The precast concrete panels of the superstructure are formed into an irregular shape to mimic the shape and colour of the surrounding erratic bounders on the moraine of the Mueller Glacier. The panels are also sized so that they can be readily lifted by a helicopter and placed during construction. The site was selected to allow the structure to be built into an existing terrace in the moraine to offer ‘at grade’ access to the cubicles and to partially hide the drums.

The toilet superstructure is constructed from 75mm thick precast concrete panels which have an exposed aggregate finish. The panels are reinforced with galvanised mesh for durability due to the reduced concrete cover.

The facility provides a necessary service and protects the sensitive alpine landscape. The detailing is thoughtful, robust and effective and provides clean and safe drum changeover and removal. It may well end up being one of the most photographed back-country toilet structures in the country! The subtle appearance of the structure combined with its operational effectiveness is a result of the robustness of the design and attention to detail taken during the design.

In addition, the project team were able to identify improvements to the Department of Conversation’s original request and then implement these for the betterment of the project.

What stands out about this project and makes it noteworthy?

While this structure appears to be a simple toilet cubicle, it represents the refinement of a system to remove human waste from such sensitive environments. The design is based on extensive experience in designing similar backcountry and alpine toilets. Each element of the system has been refined to achieve the most effective performance. This includes details such as washing water harvested from the roof, ventilation of the toilet pedestal, internal light, ease and safety of drum change over including the bayonet dropper pipe, the selection of the tanks and their cradle, nylon wheels for ease or rolling of the drums and a variety of other details.

Precast concrete is not the first material a designer would consider when a project required helicopter transport of construction materials!

The project team worked well together, and the project team were able to identify and implement the improvement to the roof structure different to the Department's original requirements for polycarbonate without fuss.

How did you achieve consulting and design excellence with this project?

During the design of the stocking stream toilets, we knew we wanted the structure to blend into the environment sympathetically and aesthetically. The toilets had to be servicable, yet durable.

When we reflected on the project, the things that stood out to us were:

If there was one thing you would do to challenge the industry to work differently, what would it be?

We challenge the industry not to accept ‘business as usual' approaches to design and engineering. Make changes to accepted approaches using reliable and robust methods. It is not sufficient to produce a striking structural form for the finished product if the design results in poor serviceability or durability. New approaches need to be integrated with both serviceability and durability. Aesthetics, function, durability and form need to be integrated together. This is often extremely difficult in challenging environments such as the mountains or in areas such as this where we also had to rely 100% on helicopter transport.

Connect with Derek Chinn on LinkedIn

A toilet in the middle of nowhere - with Derek Chinn